What animals can have rabies?

Worldwide, the main reservoir of the rabies virus is the dog.  Rabies can also be present in different wildlife species, such as raccoons, skunks, mongooses, jackals, foxes, coyotes, raccoon dogs and bats. The animals that can act as reservoirs of rabies infections vary across countries, but because of the less common contact between humans and wildlife, transmission to people is most commonly from dogs.

Small rodents are not reservoirs of rabies, and are rarely reported to be infected with rabies, so a bite from a squirrel, rat, mouse, guinea pig, hamster, rabbit, chipmunk or gerbil generally does not usually require post exposure prophylaxis. However, larger rodents such as groundhogs and beavers have occasionally been reported to be rabid.

Bats can be infected with rabies, and bats that are behaving abnormally (e.g. venturing out during the daytime, crawling on the ground, flying aggressively into a human, or trapped in a room) have a high chance of being rabid.

In general, any unprovoked mammal that bites a person could be  rabid, and PEP should be considered for the bite victim, based upon medical advice and laboratory test results. When the animal is not available for testing, medical advice should be sought regarding the need for rabies vaccination.

Can an animal or person undergoing PEP transmit rabies?

The rabies vaccine cannot cause rabies infection, so exposure to a person or an animal undergoing post-exposure prophylaxis does not constitute an exposure.

Can I get rabies from an animal showing no clinical signs of rabies?

Experiments on dogs, cats, and ferrets have shown that rabies virus can be excreted in the saliva of infected animals several days before they show signs of illness. Extensive studies have not been done for wildlife species, but it is known that wildlife species also excrete rabies virus in their saliva before the onset of signs of illness. This means that animals can transmit rabies to other animals and people even if they are not yet sick because of their infection.

What can be done to reduce the risk of rabies exposure?

I found a bat in my room – what should I do?

Do not attempt to capture the bat yourself, unless you are well-equipped to do so. Leave the room and close the door.Contact an animal control officer, and determine if anyone in the household (including pets) could have possibly been exposed to the bat.  Contact a medical professional, veterinarian, or public health official to report the exposure and ask about rabies vaccination.

Often a person is not aware that they were bitten by a bat.  If you should awaken from sleep and notice a bat in the room, contact a medical professional immediately.  Bite marks from bats are sometimes hard to see due to the relatively small size of their teeth, and it is possible for transmission through a bat bite to go unnoticed as a result. Watch our Bats and rabies video for more information.

If rabies is passed through saliva, why are scratches a risk?

Scratches from an infected animal may cause infection because saliva is sometimes present on claws - particularly if the disease is causing the animal to drool excessively (hyper-salivation). 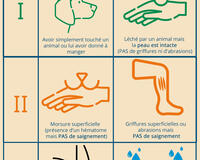 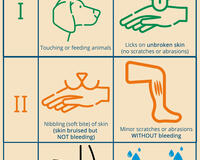 This poster provides a quick reference to correctly categorize bite wounds using the WHO wound category classifications for rabies. The posters provide the information in plain language with clear imagery.

Both color and black and white posters are available in JPEG and PDF format for your convenience. 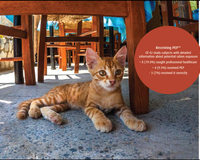 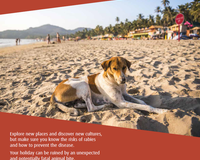 Explore new places and discover new cultures, but make sure you know the risks of rabies and how to prevent the disease. Your holiday can be ruined by an unexpected and potentially fatal animal bite.