A Filipino Experience to Remember 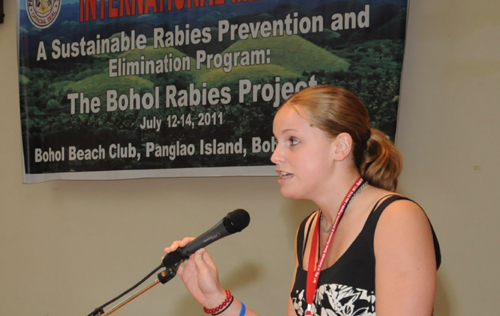 Jeanna Giese talks about her recent trip to the Bohol Rabies Program.

“Five days filled with mounds of rice, tons of culture, and a great new hope for rabies elimination. I shall never forget my experience on the island of Bohol, Philippines. I was thrust into a world I did not belong in, and yet I felt whole because we all experienced the same terror and had the same goal.

I learned much about the effect that rabies once had on the island. Because of that, I could better see the pure dedication the people had to prevent more suffering. I saw so many people of different occupations and different ages putting all of their time and effort into making Bohol Rabies-Free.

First there is the government, veterinarians, doctors, and committees that all came together for one cause. I met a governor whom was 100% for rabies elimination and stray dog control. Veterinarians and doctors came together to register, vaccinate, and control the stray dog population. Many committees were formed to help register and vaccinate pets. They all agreed on one goal, and they all worked together to reach it.

Second there are the schools. The teachers in these schools realized the problem, and agreed to take action. They implemented a program that is changing the way the kids view animals, and opening them up to a new way of life with their pets.

I visited two schools during my visit to Bohol. In the first, I was able to share my experience with rabies. In the second, I was able to see the learning program and to witness its effectiveness. The program that is put into the many classes is something that I wish to see all over the world.

Third, the children are a great group of citizens that contribute much to the Project. Kids of all ages are willing to learn the safe side and dangerous side to pet ownership. While observing a science class’s rabies lesson, I saw firsthand how young children do not fully understand the terrible effects of the disease until it is shown to them. A documentary was shown to the class featuring victims of rabies. I remember half of the class quietly giggling as they watched adults and children lash out in terror as they succumbed to rabies. As the documentary moved forward, the giggles lessened until the room was filled with serious and concerned faces. I’m sure it was a new and unbelievable sight for them to see, but after time the message sank in, rabies is no joke.

I have heard many stories from veterinarians and doctors who have watched too many children and adults die of rabies. With having lived through the suffering, I know their pain. My hope, wish, and prayer is that one day these people never have to watch another child die of rabies.”