One Health workshop on rabies in Haiti

Haitian and international partners attended a One Health workshop on the control and prevention of rabies in Haiti, from the 14-16th of September 2015 in Port Au Prince. In attendance were professionals from the Ministry of Agriculture and Natural Resources Development (MARNDR), Ministry of Health (MSPP), Continuing Promise 2015, U.S. Naval Ship (USNS) Comfort, US Centers for Disease Control and Prevention (CDC), Christian Veterinary Mission (CVM), Pan-American Health Organization (PAHO), Humane Society International (HSI), International Foundation for Animal Welfare (IFAW) and GARC.

The first session was a comprehensive symposium on the current situation of rabies in the country which was covered by Haitian media in preparation for World Rabies Day. Dr Max Millien’s data showed that Haiti is one of the last countries in the Western Hemisphere that still suffers from large numbers of human rabies deaths. In Haiti, as in many developing countries, the veterinary and medical infrastructure are not yet developed enough to be able to determine exactly how many people die from rabies in Haiti each year, but it is estimated that more than 10,000 people are exposed to the virus through dog bites, and several hundred people die.

Rabies control efforts have been less successful in Haiti due to many competing economic, political, and cultural priorities. Despite these challenges, progress towards control has been steady, with development of a national rabies control strategy (2007), the first dedicated animal rabies diagnostic laboratory (2012), and the first laboratory-based animal rabies surveillance program (2013). In 2014, Haiti also realized its largest mass canine rabies vaccination campaign to date, conducted by MARNDR. Non-governmental agencies have also been quite successful in establishing rabies vaccination, education, and animal welfare programs in Haiti. In general, however, these NGO activities have been poorly coordinated between institutions and their impacts have not been evaluated. Recent advances have provided the first glimpse into the true burden of rabies in Haiti, and represent the first indications of potential success in rabies control for the country.

After the One Health symposium, the attending participants split into two workgroups for the duration of the workshop to address (i) the short-term goal of developing an integrated and sustained approach to rabies prevention and control, and (ii) the long-term goal of reducing the number of dog bites and, thus, the cause of rabies and deaths among humans. 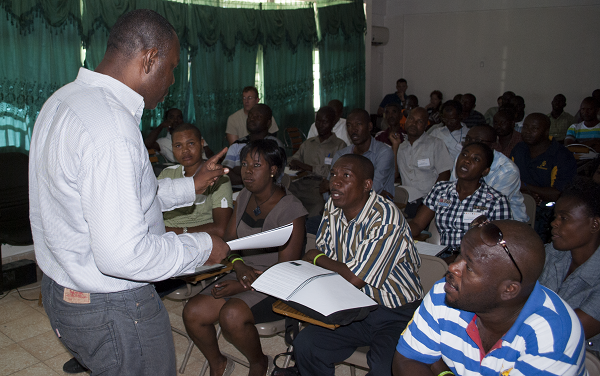 Key activities included the incorporation of bite-case prevention and responsible pet ownership into the school curriculum of the country, the expansion of the existing surveillance network into more departments, the scaling up of dog vaccination campaigns and the distribution of human vaccine and biologics throughout the country.

This group also used the Stepwise Approach towards Rabies Elimination (SARE) tool developed by the FAO and GARC. The SARE self-assessment was completed by everyone in attendance over a period of two days, and it was shown that Haiti is currently at stage 1.5 out of 5, indicating that whilst good progress has been made, the Haitian government still has a long way to go in order to achieve the elimination of canine-mediated rabies in humans. The outstanding objectives identified by the SARE Output were discussed and prioritised, taking into consideration that the international partners could provide further assistance in regards to achieving more of the objectives.

The second workgroup consisted of 47 para-veterinarians and veterinary technicians who travelled from across Haiti to undertake and complete the Rabies Educator Certificate (REC) course.

Thanks to the diligent effort from the USNS Comfort, all of the REC course material, pre-course assessment and final assessment were translated into Creole. Three Haitian professionals, who became REC certified prior to the onset of the workshop, presented the course work to the participants and facilitated discussions. The course facilitators, who were all fluent in Creole, were Pierre Dillius, Dr Rony LaFontant, (a Haitian veterinarian) and Apollon Destine (a PhD candidate working for the Carrefour Health Department in Haiti).

After completion of the five REC modules, the attending participants completed a paper-based, multiple-choice test. Over 80% of participants passed the final assessment, and each received a REC-certificate of achievement in Creole and a comprehensive rabies-advocacy package in Creole, designed by the CDC, to be used within their communities to raise awareness.

During the course, one participant recognized the symptoms of rabies as those that were seen in a young child in his village. The participant was provided with rabies educational materials and went to his village to collect more information, where it was discovered that the child was bitten by a dog several months before her death.  A joint-ministerial investigation was conducted in the village, and an additional five bite victims were identified and vaccinated. This case, as with so many others in Haiti, would have gone unrecognized without the education training provided by the REC.

Subsequent to the One Health workshop, a mass vaccinatio 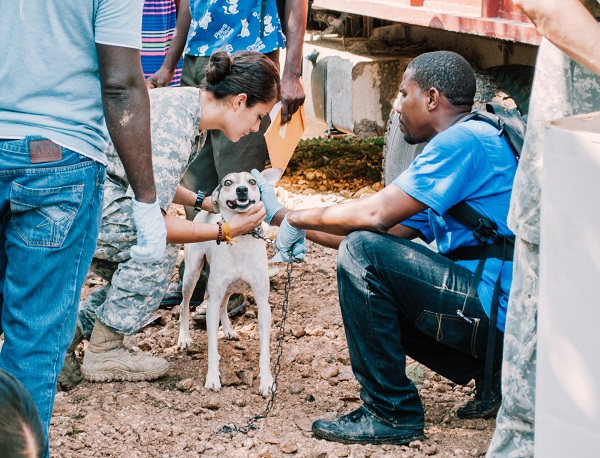 n and spay/neuter campaign was run on the outskirts of Port Au Prince, with CVM, CDC, USNS Comfort and GARC personnel all assisting in various ways. During the daylong campaign, separate stations were set up for: dog vaccination, spay/neutering and deworming; avian vaccination and health checks; and swine and cattle neutering and vaccination.

The comprehensive campaign was supported by REC graduates who walked to the surrounding houses with rabies information sheets and a megaphone to call the people to action. During the day, upwards of 250 dogs and cats were vaccinated against rabies, 21 dogs were spay/neutered, and countless cattle, swine and chickens were subjected to routine check ups and vaccinations. The vaccination campaign was successful in reaching many people within a short period of time, ensuring the health and wellbeing of themselves as well as their animals.

Contributed by Andre Coetzer (GARC) with assistance from Ryan Wallace (CDC), who both participated in the workshop.