The first regional PARACON workshop was held in Grand Bassam, Cote d’Ivoire from 29-30 June 2016 and introduced the delegates to several new tools to support their rabies control efforts.

The workshop was organised by GARC with support from Centre Suisse de Recherches Scientifiques (CSRS) in Côte d’Ivoire who formed the local organising committee. This workshop was a region-specific workshop for West and Central African countries as a follow-up to the PARACON meeting held last year in South Africa. The workshop focussed predominantly on Francophone countries; with some Anglophone countries from the region also present. In total, 15 African countries were represented, with 10 of the 15 countries having representatives from both the medical and veterinary sectors. Of these 15 countries represented, 4 were not represented at PARACON in 2015 predominantly due to the Ebola crisis, so this meeting extended the reach of PARACON to representatives from 37 of the 48 mainland African countries (plus Madagascar). 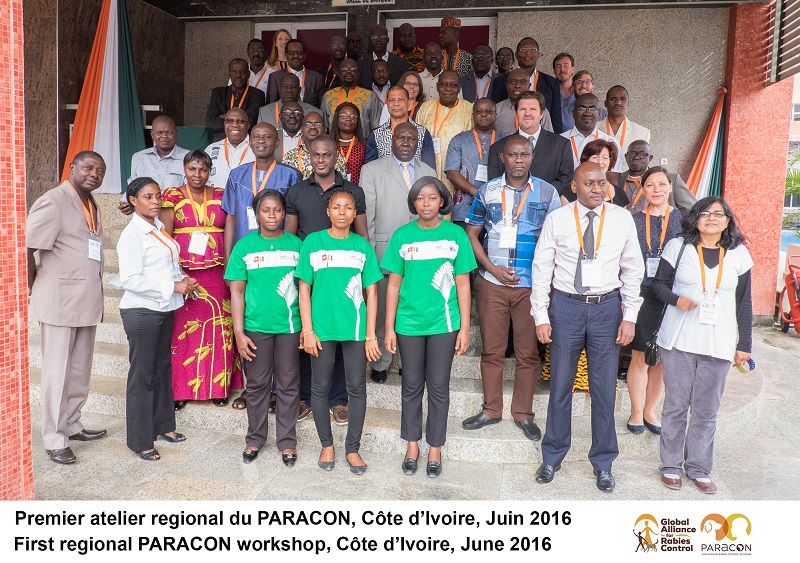 Following from the successes at the inaugural PARACON meeting, this regional PARACON Workshop again focussed on the use of the Stepwise Approach towards Rabies Elimination (SARE) tool in order for countries to perform self-evaluations regarding their progress towards controlling and eliminating rabies. At the first PARACON meeting in 2015, it was proposed that the SARE tool be an ever-updating and improving tool. Building on this promise by GARC and all of the organisations involved in its development, a newly revised version of the SARE tool was used for the first time at this PARACON workshop. The revised tool was shown to be a huge improvement, particularly with the inclusion of a feature for automatic scoring of the country’s stage. This, and other revisions, resulted in a more comprehensive and accurate assessment of the situation in each country. Several countries performed the SARE evaluation for the first time. The preparedness of all of the delegates, as well as the fact that most countries were represented by both Medical and Veterinary delegates, enabled a fruitful and accurate self-assessment of each of the countries’ progress.

The newly developed PARACON Bulletin—another outcome of the first PARACON meeting developed over the course of the past year—was also first unveiled to the PARACON network at this meeting. Country representatives were provided login details and shown the basics of reporting data directly onto the Bulletin—eliminating the need for paper-based or basic electronic country reports. The PARACON Bulletin provided immediate and useful analyses to country representatives, automatically calculating totals and percentages for various important data elements. Importantly, a basic estimate of dog populations within each country was automatically calculated for countries, from which estimated vaccination coverage was determined. These important data were especially interesting to delegates and showed the value of the PARACON Bulletin in providing essential information for advocacy and targeted control efforts. Any African country that was not represented at the PARACON workshop is now welcome to contact the PARACON team ([email protected]) for more information about the bulletin or for access to the bulletin. The web address and walkthrough for the bulletin is also available on the PARACON website.

Lastly, the next GARC Education Platform (GEP) course was beta-launched at the workshop. The Community Caregiver Certificate (CCC) is a course specifically targeting those individuals interested in helping their communities fight rabies. The CCC trains individuals as community workers that are then able to facilitate interactions between the community and professionals involved in rabies control and elimination. After a short presentation about the course, valuable feedback was obtained from the delegates at the workshop, which highlighted the importance of networking and inviting countries to contribute relevant information from their experiences and knowledge. This feedback included the suggestions for the inclusion of further modules into the course as well as editing to better suit all countries in Africa, making it a universally applicable, relevant, and useful course. The course materials will be revised and improved upon in order to create a comprehensive course for the GEP.

PARACON would like to thank all of the partners and sponsors involved in hosting and enabling this regional workshop. It was our experience that this workshop provided a valuable and insightful platform for neighbouring countries within a region to network, communicate, and share their experiences and efforts towards rabies control and elimination, whilst being introduced to new and ever-evolving tools that may facilitate their efforts. Country representatives departed the workshop with a self-set goal to achieve 5 activities from the SARE tool before the next main PARACON meeting scheduled for 2018. These 5 activities will enable each country to progress further upon the SARE scale and were set to be achievable goals to demonstrate good progress within their country.