In Nepal, the Kathmandu Metropolitan City (KMC) authority has developed a novel approach to street dog management and rabies control by devolving responsibility to the smallest unit of local government – the ward. An Animal Management Committee (AMC) is established in each ward, with the prerogative to ensure that all street dogs are registered to a named animal care-giver, rabies-vaccinated, and (if desired) sterilized; additionally, all residents are educated in responsible dog ownership. The project, named ManuMitra (meaning friend of human in Nepali) was launched in March 2016 as a core program of KMC’s Urban Health Division.

Rabies is endemic in Nepal with frequent outbreaks inside the capital. A household questionnaire in 2016 found that half of Kathmandu’s 80,000 owned dogs have the freedom to roam publicly at any time (contributing to a street dog population estimate of 22,000), and abandonment of sick or unwanted dogs is high.

“For 50 years, KMC poisoned 10,000 street dogs per year (half the population) with no effect on rabies or nuisance issues. Then we spent 15 years relying on NGOs and the private sector for a solution, but the dogs are there because of the community, so the solution must lie within the community. We looked at other models of municipal dog management in south Asia but they seemed to lack a mechanism of community mandate and empowerment,” said Hari Kumar Shrestha, chief of KMC’s Urban Health Division.

One of the responsibilities given to each AMC is to identify local residents who care for street dogs, and recruit them as Animal Management Assistants (AMAs). Each AMA joins a peer-supported training program and is given an official ID badge and first aid kit. By harnessing the energy and dedication of AMAs, the KMC is building a people-powered model of dog management, which can be activated to respond to other animal management issues, such as human-wildlife conflict or abandoned cattle.

“It was a risk to design a project which hinges entirely on the community. But we found no shortage of local people willing to work voluntarily for street dogs. Even (or perhaps especially) in the most underprivileged communities, there are individuals who resolve human-dog conflict or unofficially act as a font of knowledge on dogs. They are the experts in their local dogs and local humans, and they are permanent residents. It would be inappropriate for us to come and attempt to do their job – the only question we should ask is, ‘how can we help these people?’” queried Basanta Gautam, ManuMitra’s community coordinator.

To date, AMCs have been established in 20 of the city’s 32 wards, and 126 AMAs are active across the city. Under ManuMitra, all government schools include education on rabies and dog bite prevention, while dog managed zones are established in areas that require more urgent intervention (e.g., the Parliament building, schools and hospitals). 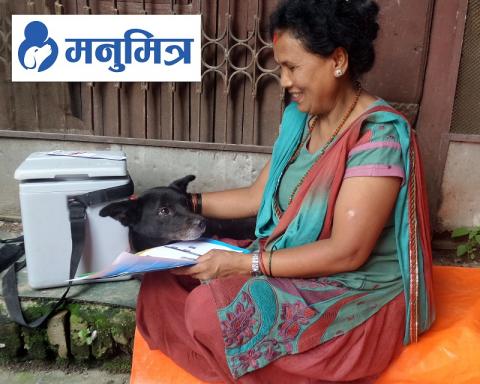 “Now we can walk through the wards and see that all of the dogs are ear-notched (indicating they are sterilized). AMAs will call us if there are any new unsterilized, sick or suspect rabid dogs. Our AMAs are becoming frontline community animal health workers, literally saving lives by preventing rabies, protecting children and vulnerable people from dog bites, and making the community a better place to live by combatting cruelty and ensuring the welfare of street dogs for their lifetime,” said Dr. Prabin Thapa, ManuMitra’s veterinary coordinator.

Biannual street surveys already show a declining density and changing composition of street dogs in ManuMitra intervention zones, including a 70% reduction in lactating females, which has been attributed to the effects of increased community engagement. This has also spelled an improvement in rabies control efforts, with 20 out of 32 wards participating in the ManuMitra program attaining an average rabies-vaccination coverage of 86%. In addition, some of the more established AMCs are now organising their own mass anti-rabies vaccination (MARV) campaigns, sourcing rabies vaccine directly from the livestock department.

Contributed by Sarah Vallentine, ManuMitra Program Manager. ManuMitra is being technically supported by the Jane Goodall Institute Nepal with funding from Humane Society International for its pilot year. Additional information on the program can be found in the Nepali Times, “A Woof of Fresh Air,” and on YouTube, “ManuMitra: Sustainable Dog Management Model,” and on the ManuMitra Facebook page.