A multi-institutional research study headed by Meagan C. Fitzpatrick at the Yale School for Public Health has shown for the first time that repeated annual dog vaccination campaigns in rural Africa are cost-effective.

The incidence of rabies is highest in African rural areas due to the lack of access to PEP, limited education about rabies, and, typically, no control of the disease in dog populations. Under these circumstances, and with frequent reintroductions of virus, annual canine vaccination strategies are needed, but concerns about their cost and sustainability are major barriers to their implementation.

A mathematical model of rabies transmission including dog and wildlife hosts was developed to analyse the epidemiological effects, human health benefits, economic costs and cost-effectiveness of dog vaccination at rates varying from 0 – 95%. 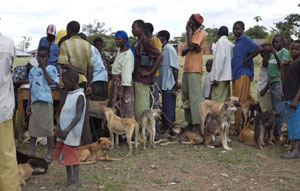 Epidemiological data for two different regions in Tanzania; Serengeti (endemic rabies in a agro-pastoralist setting) and Ngorongoro (epidemic rabies in a pastoral setting) were put into the model, and the results reflected observed dog and human rabies rates before any mass vaccination occurred. Based on local data, each rabid dog was assumed to bite on average 0.51 people, and the resultant years of lives lost and costs of PEP resulting from each rabid dog could then be calculated. The costs of dog vaccination campaigns were also based on local data.

The costs (in $) and benefits (in life years saved) of annual vaccination of different percentages of the dogs (coverage rates) from 0 to 95% over a 10 year period were then compared. Vaccination coverage rates that resulted in more lives lost and at a higher cost than other coverage rates were excluded and for the remainder, the incremental cost-effectiveness of providing vaccinations to increase the coverage rate to the next level was calculated.

Given that the model is likely to be applicable across a wide variety of settings across Africa, the authors recommended immediate canine vaccination campaigns in East Africa.  Annual vaccination will curtail the transmission of rabies to human populations and a significant reduction in human deaths from the disease. Where PEP is hard to access, protecting people by vaccinating dogs is imperative, but canine vaccination was found to be cost-effective even if access to PEP is improved.  Under all assumptions of willingness to pay for vaccination, annual vaccination strategies were still the optimal way to prevent human deaths.