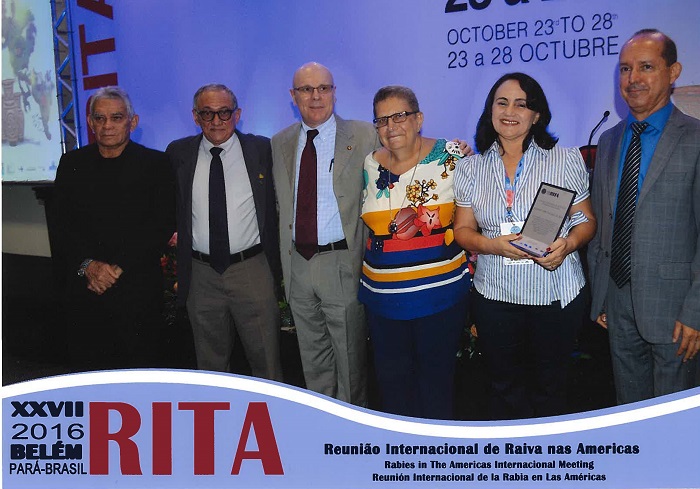 The annual Rabies in the Americas (RITA) conference was held on October 23-28th in Belem, Brazil in the heart (and the heat!) of the Amazon region, coinciding with the 80th anniversary of the Instituto Evandro Chagas, Brazil’s public health surveillance agency. First started 27 years ago in Atlanta, GA, this meeting continues to bring together veterinarians, public health officials, academics and students to present and discuss the latest research on rabies and how to control and prevent its spread in domestic animals and wildlife in the Americas. The warm hospitality of the Brazilian people was evident throughout the meeting, especially during the evening receptions, the gala dinner and the fundraising auction where traditional Brazilian musical festivities and dancing were the highlights.

Along with the President of RITA, Dr. Ivanete Kotait of the Vencofarma Laboratory of Brazil, participants at the opening ceremonies included senior representatives from many of the Brazilian public health organizations and government departments. Inclusion of and collaboration between multiple government and regional public health organizations across all health sectors (veterinary and human) is essential for achieving rabies elimination in the region, and gathering these senior ministers at the event indicated a strong commitment regionally to rabies control efforts.

Each year, RITA draws accomplished rabies researchers from around the world to participate, but this meeting also provides many opportunities for young scientists to present their work. Winner of the annual George Baer Latin American Investigator Award, Julio Benavides spoke on the “Spatial Expansions and Travelling Waves of Rabies in Vampire Bats in Peru” and described how his research is predicting patterns of spread of bat rabies into Western Peru and discussed the opportunities he has had to test control strategies.

Other research presentations explored issues such as the control of rabies arising from bat bites, treating those exposed to the virus, the immune response in humans, as well as the evaluation of control and surveillance efforts. Amongst many important new findings, some of those shared were:

The meeting was capped by a thought-provoking webinar which was broadcast to hundreds of viewers not attending the meeting in person. Presentations were focused on: the role of serology in assessing an animal’s vaccine status after a potential rabies exposure; the use of an inexpensive microscope from paper for dRIT diagnosis; using a smart phone app to assess vaccination coverage in dogs; the value of oral rabies vaccine (ORV) for dogs and taking stock of all the resources needed to achieve the goal of global elimination by 2030. The last session explored immunizing high-risk indigenous populations with PrEP prior to exposures; the development of potential anti-viral medications for rabies; and the increasing success rates of intensive-care treatment for rabies patients.

The conference proceedings ended with a presentation on the 2017 RITA to be held in Calgary Canada. The University of Calgary Faculty of Veterinary Medicine will be host, along with its partners, Alberta Agriculture and Forestry dept., the Canadian Food Inspection, and Canadian Public Health Agencies.

As the Americas region comes closer and closer to reaching complete elimination of canine rabies, there is increasing need to share and transfer the knowledge and lessons learned along the way to other countries in Africa and Asia who continue to struggle with a high burden of human cases. By continuing to set an example of successful international collaboration amongst rabies experts, the RITA meeting can help to inform rabies control efforts not just in the Americas region, but around the world.

Contributed by Laura Baker, who represented GARC with Louise Taylor at the meeting