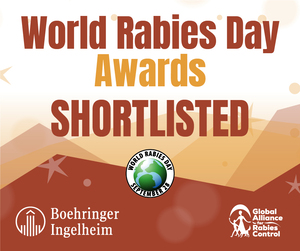 I help run a domestic animal veterinary unit called the Community Animal Health Initiative (Ewaso Lions and Vet in wild). This is operating as a mobile veterinary unit in Northern Kenya, mainly focusing on dog and cat health within the pastoralist community. The aim of the project is to improve the welfare of dogs and cats in the community as well as prevent and monitor infectious and zoonotic diseases at the people, domestic animal- wildlife interphase. Our day-to-day work involves treatments, vaccinations and population control in dogs and cats as well as community education on one health, disease surveillance at the people-domestic animal-wildlife interphase and attending any wildlife-inflicted injury emergence cases in other domestic animal species.

Dogs play an important role in Northern Kenya pastoralist communities. This is especially because the land is inhabited by people, domestic animals, and wildlife. The dogs play an important role of protecting the domestic animals while herding. Having more livestock necessitates having more dogs. With the lack of access to vaccines, rabies in domestic animals in this area is often reported, among other health challenges that affect domestic animal welfare. With the mobile veterinary unit in place, we have created more awareness to the community members on telling a sick dog, the importance of vaccinations and the need for responsible animal ownership. Because the community really value dogs, this has been well received. Now we have more dogs presented during our annual vaccination campaigns and even get more dogs vaccinated throughout the year during our ambulatory in the community. We also now get more people reporting suspected rabid dogs to enable us to confirm the disease. In addition, we also get calls for treatment requests in case a dog or cats is sick. In quest to keep their dogs from roaming during estrus and being exposed to diseases, the community members had opted for population control methods such as placing a rubber on the testicles to castrate male dogs and female puppies killed. With the veterinary unit in place, we have educated the members on presenting their dog to us during sterilization campaigns we organize. This has increased tolerance to female puppies and welfare of male dogs. We have also made educational resources for the Samburu pastoralist community in their native language. This includes a poster on rabies, Canine Distemper, and a film on responsible animal ownership. The veterinary unit has also been a model of the importance of the one health approach to disease management and prevention. Many have now come to appreciate the link of responsible domestic animal ownership, the health of people and wildlife conservation.

Dogs within the pastoral community of Samburu, Northern Kenya, play a vital role of protecting livestock from predation while herding. This is especially because the landscape is home to people, domestic animals, and wildlife. Owning many livestock comes with also having many dogs. From a survey conducted by Ewaso Lions, 99% of owners attributed diseases as the biggest challenge facing domestic carnivores. Diseases such as rabies impact people, domestic animals, and wildlife. Many of the community members know of someone that died of rabies, a suspected rabid dog and some rabid wild animals. A One Health approach was the solution.

*All information supplied by nominee. Content edited for language and formatting only*