Continued capacity building throughout Africa in partnership with the UN FAO 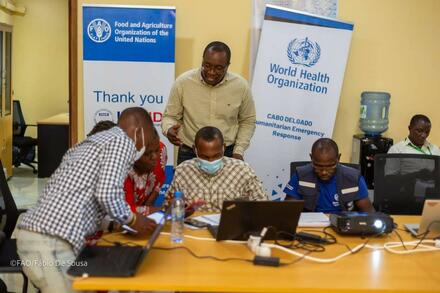 Mozambique is experiencing one of its worst rabies outbreaks in several years in the northern areas of the country, with the Cabo Delgado province being the epicenter of the outbreak. Since August 2021, there have been more than 8 suspected human rabies cases in Cabo Delgado alone, including a young boy. Each of these deaths could have been prevented. This dire situation resulted in support from the Food and Agricultural Organization of the United Nations (FAO) Mozambique in collaboration with the Mozambican government. Mass dog vaccination campaigns were undertaken, but a lack of rabies surveillance data meant that it was difficult to guide efforts, quickly respond to new cases, or determine whether the vaccination was controlling the outbreak.

The major challenge is that the laboratory is too far away to be of use for rapid diagnosis and response. Sending a sample takes about 12 hours by car and another 3 hours by air, just to get it to the lab! This also makes it extremely expensive and unrealistic to send samples.

Therefore, there was a need for something to help prioritize samples for laboratory diagnosis and ensure that reliable results were obtained immediately to make decisions and target efforts to areas of high risk. This is where GARC’s RAIDER protocol could help. The RAIDER protocol brings together all the best practices for in-field sampling, diagnostic screening using lateral flow devices (rapid kits) and reporting using the Rabies Case Surveillance (RCS) for immediate notification and response. GARC, in close partnership with the FAO Mozambique office and the Mozambique government, delivered RAIDER training to 12 professionals to improve case tracking and facilitate outbreak response.

The RAIDER protocol caters for the exact situation as is being experienced in Mozambique – helping to screen samples in areas where laboratory capacity is not readily available and help to guide outbreak response efforts in a timely and efficient way. A reported case of dog bite in the country’s southern province of Gaza was quickly diagnosed as rabies in the central veterinary laboratory and the victims commenced PEP. Thanks to the earlier RAIDER training received which enabled proper sample collection and transport for laboratory diagnosis.

Developing a national action plan using the SARE in Chad

Chad recently made huge steps towards driving rabies elimination efforts. Authorities from various sectors, including government ministries, the public sector and many others came together in a truly One Health manner to evaluate their current rabies situation and to develop and clear, actionable work plan to eliminate rabies. After an intensive 5-day workshop – facilitated by the GARC team alongside FAO colleagues – Chad had developed a clear plan to progress their efforts to eliminate dog-mediated rabies. The momentum from the workshop was so overwhelming that Chad immediately developed a national rabies working group and has begun exploring tools and means to address their surveillance needs, while driving rabies education through GARC’s Education courses.

As we move into the new year, GARC and the UN FAO will continue to work together to support sustainable efforts to drive rabies elimination by building capacity and supporting all stakeholders with our tools, resources, and expertise.

If you are interested in our surveillance or education resources, or if you would like to host a national SARE workshop in your country, contact us!