GARC’s Communities Against Rabies Exposure (CARE) project site in Ilocos Norte received an award for being one of the Best Local Government Unit Rabies Program Implementers in the Philippines during the national celebration of the World Rabies Day on September 28th in Quezon City. 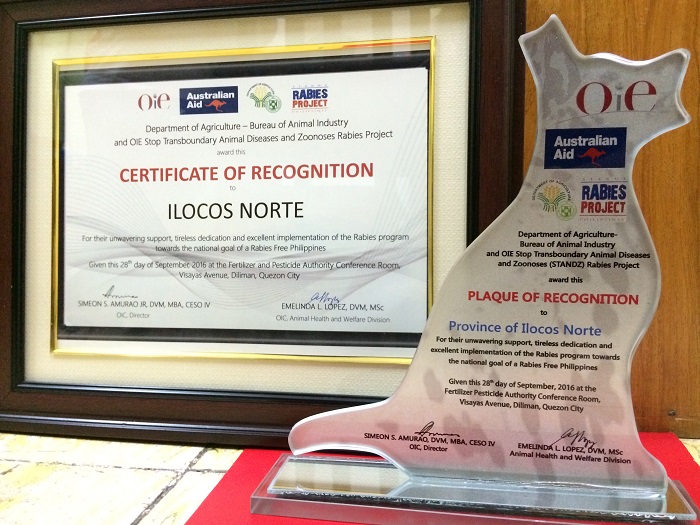 GARC’s Community Education Officer, Eunice Charis Mendoza and Field Veterinarian, Dianne Licuan received the award on behalf of Dr. Loida Valenzuela, the Provincial Veterinarian of Ilocos Norte who was not able to attend the event.

Also receiving awards were Dr Manuel Carlos of Marikina City and Dr Stella Lapiz the Provincial Veterinarian of Bohol Province; both areas where GARC has collaborated on rabies control projects with the local government.

It gives GARC great pleasure to receive this award, to join in the recognition of all those who have contributed to the rabies control efforts across the Philippines, and to recognize how much closer these efforts have lead us towards a rabies free Philippines.

The event also gave GARC the opportunity to formally present 10,000 copies of a GARC rabies prevention storybook to the National Rabies Prevention and Control Committee, to the Department of Interior and Local Government, and Provincial, City, Municipal Veterinarians League of the Philippines. The book focuses on how children should properly take care of their pets, the importance of telling their parents when bitten by a dog or other animals and also discusses animal bite prevention and management.

The storybooks, kindly reproduced by Merial will be distributed to the daycare centers and elementary schools in the GARC CARE Project sites and to other high risk rabies areas in the country. An animation of the storybook has also been aired on the Knowledge Channel across the Philippines.

Contributed by Sarah Jayme, country representative for the Philippines, GARC