Press release: Towards a rabies-free world as unparalleled global initiative gets underway

28 September 2017, Geneva – World Rabies Day marks the announcement of the biggest global anti-rabies initiative, as the World Health Organization (WHO), the World Organisation for Animal Health (OIE), the Food and Agriculture Organization of the UN (FAO) and GARC reveal an ambitious plan to end human deaths from dog-transmitted rabies by 2030.

The plan –‘Zero by 30: The Strategic Plan’ – centres on a One Health approach and addresses the disease in a holistic and cross-sectoral manner while highlighting the important role veterinary, health and educational services play in rabies prevention and control.

"The plan ensures support to countries in developing national plans, and provides innovative training and education tools across regional rabies networks," said Dr Bernadette Abela-Ridder on behalf of the four partners.  "Vaccines are a key component of the global plan and a trigger for national programmes. The United Against Rabies collaboration provides leadership and advocates for resources critical to reaching zero human rabies deaths by 2030."

‘United against Rabies’ builds on more than ten years of global partnership, research and evidence- building to demonstrate the feasibility of eliminating dog-transmitted rabies. The plan places a magnifying glass on the problem of continued human deaths from rabies and helps to make this a priority disease for key international organizations and governments. 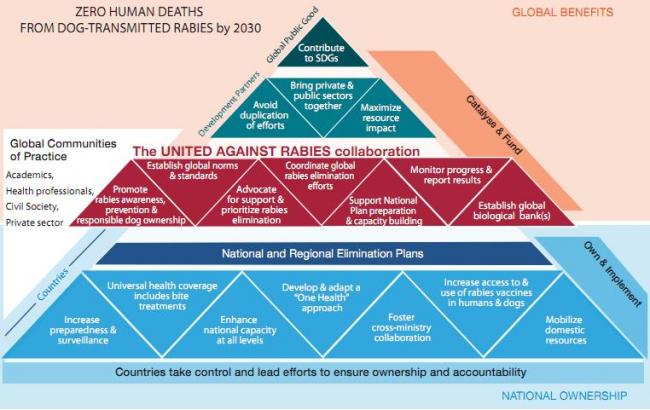 The world has the knowledge, technology and vaccines that are needed to eliminate rabies. The plan supported by the four partners aims to:

Rabies – a viral disease that occurs in more than 150 countries and territories – is usually fatal once symptoms appear. Dog-transmitted rabies accounts for about 99% of human rabies cases. It is estimated that 59,000 people die from rabies every year.

Rabies is a disease of poverty, a disease of neglect. The world’s poorest are the most affected as they cannot afford treatment or transport for care. People’s livelihoods are also affected when livestock get rabies, a loss estimated at over US$ 500 million per year.

However, rabies is 100% preventable by ensuring access to life-saving treatment following dog bites; and by vaccinating dogs to reduce risks and ultimately to eliminate the disease at its animal source. Ending human deaths from rabies requires strengthening human and animal health services; and increasing political commitment.

Many countries where rabies is of concern recognize it as a priority communicable disease with significant impact on people’s health and their country’s economy. This does not usually translate into adequate resources and actions to end rabies. Simply put, rabies falls between the cracks.

"Working across sectors to eliminate human rabies aligns with WHO’s mission to leave no one behind by building a better, healthier future for people all over the world" said Dr Ren Minghui, WHO Assistant Director-General for HIV/AIDS, Tuberculosis, Malaria and Neglected Tropical Diseases. “Eliminating human rabies contributes to the goal of providing affordable and equitable health care, while working with partners to prevent the disease in dogs, which is the most frequent source of infection."

“As the mass vaccination of dogs is unanimously recognized as the exclusive approach to eradicate the disease in humans, this United against Rabies plan is a crucial step to bring together intentions, resources and actions towards our common goal,” highlighted Dr Monique Eloit, Director General of the OIE. “Elimination of dog-mediated rabies is achievable, and we will make sure that it is achieved.”

“FAO is excited to be a part of the development of the United against Rabies initiative to eliminate dog-transmitted rabies. Rural communities suffer the most from this preventable disease. Rabies puts not only their own health and wellbeing at risk, but also that of their animals, which can be a major or sole source of their livelihoods. FAO has been supporting vaccination campaigns and the development of community-based programmes to prevent and eliminate rabies. This new initiative will enhance that work and can play an essential role in FAO’s overall goal to build stronger rural communities,” said Ren Wang, FAO Assistant Director-General.

GARC’s CEO Professor Louis Nel, “There is no reason for anyone to die of rabies in today’s world, and rabies endemic countries have made its elimination a priority.  With strong and sustained commitment from the human and animal health sectors, we can and will end this deadly disease.   The United Against Rabies plan is a vital collaboration of GARC, WHO, FAO and OIE which will allow us to support these countries to reach the goal of zero deaths by 2030”.

For further information please contact any of the four partner institutions: