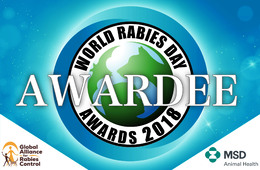 Lanna Dog Welfare activities include:
Training for rabies vaccination and animal welfare handling for livestock volunteers from the villages of Sobtia, Suthep, and Muanglen sub-districts. The training included basic information and training in animal welfare including topics such as how to approach animals safely, the management and storage of rabies vaccines, practicing injection technique on artificial skin. This was followed up with in-house visits to practice vaccinating efficiently.

Animal welfare and handling training for Buddhist monks was developed in accordance with Lanna Dog’s experience of working with various temples in Chiang Mai. It was conducted as follows: practicing approaching, handling and wound management on dummies, administering medication and record keeping, animal health and diet and rabies vaccination.

Stray dog management with the 33rd Military Circle - the training and instructions for soldiers included: dog behavior, dog catching methods - including the pros and cons of each method, anesthesia and monitoring of dogs, wound management, nursing care and rabies vaccination.

Model for capturing forest stray dogs in a national conservation area. A humane catching method, such as a wire net pen, was set up at the edge of the Mae Kuang Dam Forest. Dogs were conditioned to be familiar with the pen by feeding them in it and the pen was closed in order to catch the dogs. Different packs of dogs were captured and 104 of them were neutered, vaccinated against rabies and then returned to their area. 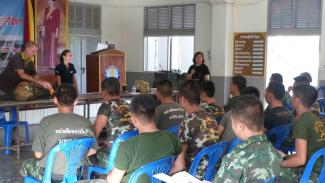 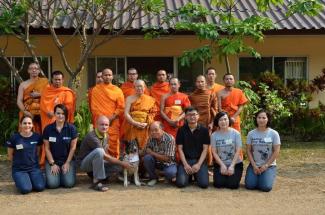