The primary objective of the Pan-African Rabies Control Network (PARACON) is to unite all sub-Saharan African countries in their common fight against rabies and to help these rabies endemic countries to develop and implement effective rabies elimination strategies. The buy-in from almost all target countries (37 of 44 PARACON countries) has been instrumental to the success of the network and this has been particularly evident with the launch of the PARACON Epidemiological Bulletin.

The PARACON Epidemiological Bulletin is an integrated system designed solely for rabies data collection, collation, analysis and dissemination that has been developed specifically for PARACON member countries. It is built on the powerful DHIS2 health management information system  already in use in 30 African countries and has been customised to collate and analyse rabies specific parameters.  It is widely accepted that data is key to any disease intervention strategy and rabies is no different. Contemporary and accurate data is essential for success in multiple stages throughout a country’s path towards elimination, especially when obtaining stakeholder buy-in at the start of any rabies control initiatives and when providing evidence of freedom from rabies after successful intervention. The PARACON Bulletin was therefore developed to facilitate data collection and user feedback at the national level for all participating PARACON countries.

Vitally, the data collected on the bulletin belongs solely to the country and permissions have to be provided by each sector (medical and animal health) for the data to be made publicly viewable. PARACON encourages transparency in data sharing, as rabies is a transboundary disease that requires collaboration among neighbouring countries and regions. 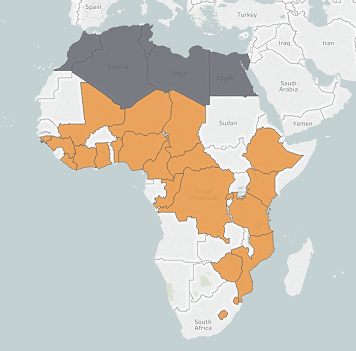 We are encouraged to see that the majority of the countries that have been introduced to the bulletin are using it as a tool for improving rabies surveillance and data reporting in their country. Furthermore, we would like to thank all of those countries that have thus far granted official permission for their data to be made publicly available. Rabies control relies on this type of collaboration. By sharing data, each country can work with their neighbours and present a united effort against rabies.

The shared data will be presented on the newly revised GARC website, under the PARACON Bulletin section, in the form of an interactive map – similar to that which is used for the ERN website. This map will automatically display the most up-to-date data submitted by countries in the form of graphs, maps and pivot tables. These visuals will be interactive in that the user will be able to select certain criteria for improved ease of use and enhanced analysis. This interactive map is currently being developed and will be available before the upcoming PARACON meeting in September.

For countries that have not yet been introduced to the bulletin, GARC will aim to do so at the second sub-regional PARACON meeting later this year. The meeting will focus on Anglophone countries in Africa and is scheduled to be held from 13-15 September 2017 in Pretoria, South Africa. More details regarding the upcoming meeting can be found on the PARACON pages of the newly revised GARC website. With strong participation from all African countries, the bulletin promises to become a central repository of data for countries to use to argue for and to track progress towards a rabies free Africa.

Contributed by Terence Scott and Andre Coetzer, coordinators of the PARACON network and the Epidemiological Bulletin. More information on the PARACON Bulletin is available at:  rabiesalliance.org/networks/paracon/bulletin